Amazing What One Little Letter Can Do

Many years ago I started researching my husbands family tree.  It began with a simple chart that his father or someone on the line had done.  It was a great little chart and it definitely gave me enough to get off to a great start.

There was only one little hitch - her name was Caroline Reusch.  Caroline was the daughter of Heinrich Augustus Reusch and his wife, Anna Mary Gunther (Gundern).  Caroline was born in 1825, but there was no death date given.  It was reported that she married a man by the name of Henry Dencer.   No information on Henry at all.   And that is how Caroline & Henry turned into one of my brick walls.

Notice the spelling of Henry's name as DONZER?   Yeah I did too!

And then one day it happened. 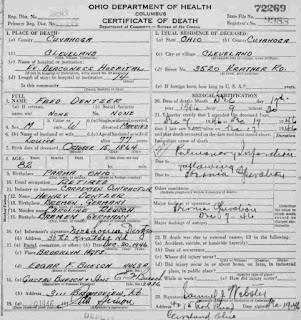 I was browsing some images for the county where I thought maybe they had relocated to and I stumbled upon this.  The death certificate for Frederick DENTZER.

The spelling immediately got my attention, and it just got even better when I noticed who the parents are...  Its Henry DENTZER and his wife Caroline Reusch.  Imagine that.

I never thought to put a T in the name, EVER!

Thus goes the saga of one little letter changing the surname and putting off my quest to locate Caroline Reusch DenTzer and her family.   Now I know where they are buried, when they died.  I was able to locate more information on the children as well with the new spelling.   In all my searches, changing up the vowels and the C and Z did the DenTzer spelling ever surface.

Somehow I wonder if this fits the "no one will be found until they are ready" thingy?

Either way,  I'm glad she's found and I can finally say I've identified and tracked down all of Heinrich & Anna's children.   Now for the rest of the descendants.

To say I've been away for a while is rather an understatement.   But sometimes life gets in the way.   I've been doing genealogy - working here on the stuff on our families, but just not blogging about it.

The interesting thing is - yes, I found out people are reading, people are related and they are leaving comments, even though I wasn't blogging.  So I'm back.  For how long?  Can't say.

The past year has been a good year for genealogy. I hired a pro-genie to work on my Kreitzer line in Germany and he was very successful with his search.  Perhaps I'll share that soon.  My personal work on my data base is on going.  Moving notes, changing things and researching.

The grandsons are all growing and wanting to spend time at grandma & grandpa's,  not going to refuse them.  The flower gardens here are so beautiful but they too want our time, and of course we have Mr. Brown Eyes, who does enjoy seeing me step out of this office now & then. Finally throw in my sewing and the start of my Etsy Shop - KarmelleHome.   Lots of stuff handmade here in my home, on my sewing machine.  Sewing has been another of my loves since I started at the age of 7 or so.  My friend Michelle is also a partner in the Etsy Shop.   Stop on in and take a visit.  Maybe you'll find something you can't live without.

If you enjoy the blog, or have in the past, thanks for reading.  If you find me because of something you see here, drop a note - I'd love to hear from you.  Cousins are always a pleasure to hear from.

Happy Researching!
Karen
Posted by Karen K at 8:00 AM No comments:

This past week I found myself working on several different projects - some very basic some rather detailed, but all part of staying on track with my genealogy.

The genealogy vacations that we took in June & July produced a ton of obits, colonial records, deeds and more.  I think (notice that word think?) I finally have all that scanned and lots of it is linked and typed in to my ancestors files.  A lot of what I had from that trip were images that I collected at various repositories and they need to be cropped and typed in, then linked.  It appears that most of that has been taken care of.

The hardest project I have going on is the stack or two of papers that I'm just not sure what to do with.  Some are small cemetery readings that I pick up here and there.  You know the kind,  its a small family cemetery, the one that PERHAPS one of your great great grandparents is in, only they aren't listed.  But someone else in the family is... maybe the great grandparent is there or maybe not..  but what to do with the listing?  Yeah, those sort of things.  BTW, I ended up putting that in the back of the County Cemetery book for that county that I bought back in 1990.  Not everything is on Find A Grave so those books still come in handy!  But I have a stack or two of those sort of things laying around.  So working on those too!

Lastly,  I am working on a couple of new talks.  For those who aren't familiar with me I also do speaking and I have a list of talks.  A few new ones are in the works.  Hope to get them up on my speakers page later this week.

Take all those genealogy projects and toss in getting the flower gardens ready for the winter,  decorating to some degree for the different holidays, and the sewing projects I'm working on for Christmas...  you get the idea!  But I wouldn't have it any other way.

Happy Researching!
Karen
Posted by Karen K at 8:30 AM No comments:

WELCOME - I'm glad you decided to stop by!

Thanks for stopping by! Hopefully I'll be able to share my love of genealogy with you, inspire you, entertain you & maybe even help you learn something you didn't already know!

I was born & raised in south Florida so things are pretty casual here. So grab a chair, something to "wet your whistle" as my grandfather used to say... and come sit a spell. You just never know what you'll find here!

Whether you become a follower or not... Thanks for stopping in!